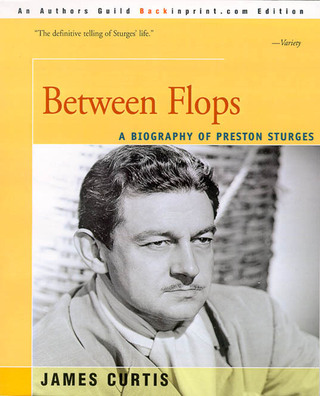 “A sobering picture of the sweat and disappointment that lie beneath the Hollywood hoopla.” — Newsweek

“Brilliant... Curtis’ writing style and wit shine as brightly as those of his subject. It is the ultimate in Hollywood package deals, a biographer who fully complements his subject. Like Sturges’ films, the book itself is virtually perfect.” — The Windsor Star

“An imposing account of an imposing life” — National Review

“...an elegant job... the best movie biography of the year.” — The Buffalo News

Between Flops: A Biography of Preston Sturges

In the decade of the 1940s, a remarkable string of vibrant and original films captivated America. Many were commercial as well as critical successes. All bore the distinctive imprint of their maker, a man as colorful as his most memorable characters.

Preston Sturges set a new standard for creativity in Hollywood. He not only wrote such films as "The Lady Eve", "Sullivan's Travels", "The Palm Beach Story", and "The Miracle of Morgan's Creek", he also directed them at the rate of two a year. He opened the door for an entire generation of writers-turned-directors and made some of the most popular comedies of the sound era. At his peak, he earned the third-highest salary in the country. He was an inventor, songwriter, actor, playwright, restaurateur, industrialist, and winner of an Academy Award. He even owned a production company with his temperamental equal, Howard Hughes.

Yet, barely ten years after it all began, it was over. Alienated by his reckless zeal for perfection, the studios turned away from him. Unable to work, Sturges took his young family to Europe, where he struggled desperately in growing obscurity to work the old magic just one more time.

Drawn from interviews, letters, and other primary source materials, this was the first full-length biography of a legendary American filmmaker, a man who made and lost two fortunes and whose genius shown brightly, as he put it, "between flops".

Published in hardcover by Harcort Brace Jovanovich, 1982. Published in softcover by Limelight Editions, 1984, 1991. Authors Guild Back-in-Print edition published by iUniverse, 1998. Now available as an eBook from Amazon.com and Barnes & Noble.