"Last Man Standing" is a Times Literary Supplement Book of the Year! 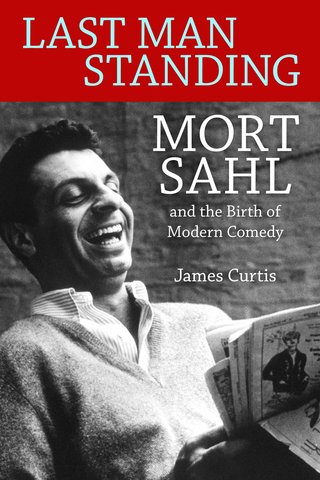 When Mort Sahl made his debut at San Francisco's hungry i in December, 1953, the public's idea of stand up comedy was limited to Borscht Belt comedians like Henny Youngman and Morey Amsterdam. Nightclub comics steered clear of hard news, and Bob Hope's occasional political jibes often came off as friendly. Working in an improvisational, jazz-influenced style, Sahl attacked Senator Joseph McCarthy, President Dwight D. Eisenhower, and, particularly, Vice President Richard M. Nixon, who was to remain a favorite target for decades.

Sahl recorded the first modern comedy album in 1955, and appeared on the cover of Time in 1960. (The magazine famously described him as "Will Rogers with fangs.") In breaking the mold of what a stand up comedian should look or sound like, he opened the door for an entire generation of "smart" comics that included Lenny Bruce, Mike Nichols and Elaine May, Shelley Berman, Bob Newhart, and Dick Gregory.

His career, which extended to TV and movies, spanned 12 presidencies. Appearing on stage in a pullover sweater and open collar, he worked alone, writing all his own material, using a rolled copy of the day's newspaper as his only prop. In the mid-1960s he put his career on the line when he went to work as a volunteer for New Orleans District Attorney Jim Garrison, who was investigating a conspiracy to assassinate President John F. Kennedy. Mort became such a fervent believer in Garrison's crusade that it took nearly a decade for him to get his career back on track.

Written with Mort Sahl's full cooperation, "Last Man Standing" incorporates interviews with his friends and colleagues, including Woody Allen, Dick Cavett, Shelley Berman, and the late Yvonne Craig. "It wasn't a very puritanical life," he commented, "but it was a whole lot of fun."

"James Curtis has superbly chronicled the emergence and career of a comic genius who revolutionized stand up comedy and changed it forever. If you weren't there at the time, it's hard to realize the enormity of the impact Mort Sahl had on America--both as writer and performer--and this book takes you through it in an exciting narrative that teems with examples of Mort's dazzling wit."
-- Woody Allen

"The book is a triumph. Of prose style, engrossing, lively story-telling, and emotionally moving incidents in that complex genius's strange and dramatic life. Also, once you put it down, you can pick it up--for re-reading. All books should be so good."
-- Dick Cavett

"'Last Man Standing' is a magnificent, flawless, and perceptive biography of the great Mort Sahl. I loved the book, and laughed out loud as I read it."
-- Mark Russell

"The name might not mean a great deal to those of you who dote of the contestants on 'Dancing with the Stars,' but Sahl, though born in Canada, is to American comedy what Bill Russell was to basketball. He changed the game forever. And he's still playing. He gets his due and more in a terrific new book by James Curtis, who rightly subtitles the first full-length biography of Sahl 'Last Man Standing' with this: 'Mort Sahl and the Birth of Modern Comedy.' That's no hyperbole."

"A sympathetic, evenhanded biography of a man notorious for his savage wit."

"James Curtis captures the dueling sides of Sahl's persona in 'Last Man Standing,' his fair-minded new biography. He meticulously charts his subject's path from striving club comic to mercurial star. Coupled with deep dives into the morgues of Hollywood trade magazines, Curtis' interviews with the likes of Woody Allen, Dick Cavett, and Sahl himself (he turned 90 this year) give the reader a clear sense of his nimble mind and his influence on younger talents."
-- Kevin Canfield, Washington Post

One of Literary Hub's "Most Anticipated Books of 2022" 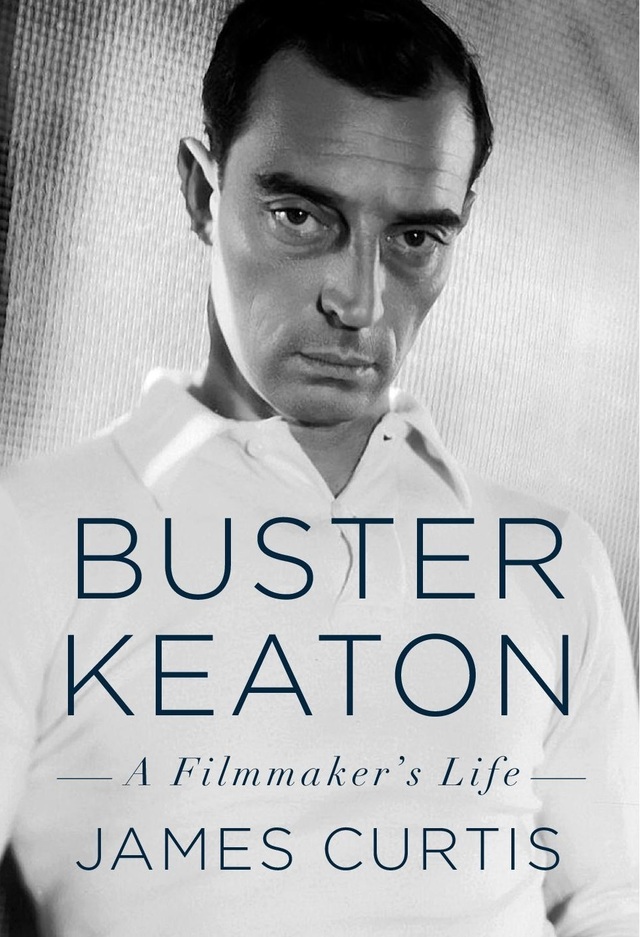 Pre-order it at Indiebound

Pre-order it at Barnes and Noble

Pre-order it at Powell's

Pre-order it at Amazon

It was James Agee who first christened Buster Keaton "The Great Stone Face," but to audiences who had known Keaton since the age of five, it was merely a formality. The whole world had come to accept his stoic features as one of the genuine trademarks of silent film comedy, a deadpan in a pork pie hat as famous as Charlie Chaplin's disreputable tramp or Harold Lloyd's eager beaver in straw boater and spectacles. "He was the only major comedian who kept sentiment almost entirely out of his work," Agee wrote, "and he brought pure physical comedy to its greatest heights."

Keaton's singular look and acrobatic brilliance obscured the fact that behind the camera he was also one of the silent era's most gifted filmmakers. Through a string of nineteen short comedies and twelve extraordinary features he distinguished himself with such indelible works as "One Week", "The Play House", "The Boat", "Cops", "Our Hospitality", "Sherlock Jr.", "The Navigator", "Seven Chances", "Steamboat Bill, Jr.", "The Cameraman", and his magnum opus "The General". As a body of work, they rival Chaplin's in terms of quality and sheer comic invention. In 1960 Keaton was awarded an honorary Oscar.

Over the past century, Buster Keaton's story has become mired in myth and legend. Now James Curtis, the award-winning biographer of W.C. Fields, Preston Sturges, James Whale, and Spencer Tracy, follows Keaton's extraordinary life of triumph and tragedy in the first major biography in more than a quarter century. Drawing on newly unearthed archival resources, as well as interviews with family, friends, and co-workers, Keaton's complex genius emerges as never before.

Curtis brings new insights to Keaton's medicine show and vaudeville years as Buster becomes one of America's most famous performing children. Entering films as the protégée of Roscoe "Fatty" Arbuckle, Keaton quickly ascends to co-director of some of the world's most popular short comedies. And when Arbuckle moves into features in 1920, Keaton begins to write, direct, and star in his own series of comedy classics, films that are still revived and honored today as some of the screen's greatest treasures.

Curtis also examines in unprecedented detail what happens when a confluence of events brings an end to Keaton's time as a top star just as he appears to have mastered talking pictures. As Buster later put it, "There I was on the top of the world–on a toboggan."

Illustrated with 130 images, some never before published, "Buster Keaton: A Filmmaker's Life" is a compelling work of research and synthesis worthy of the man who has been called "the D.W. Griffith of Comedy" and who continues to be an potent influence on movies the world over.

Also available as an e-book

and an audio book from

"It is brilliant--I was totally absorbed, couldn't stop reading it and was very sorry when it ended." -- Kevin Brownlow

"Just as Buster Keaton's work transcends its flowering in silent films, so James Curtis's biography transcends the catagory of show business biography. In a narrative that majestically carries its subject from 19th century vaudeville to Cinerama to immortality, Keaton is given his due, not just as an artist, but as a man who lived a paradigmatic American life." -- Scott Eyman

"At long last, Buster Keaton gets the biography he deserves. James Curtis has given us a monumental book, one of the best Hollywood biographies ever written. Curtis has authored the definitive biographies of W. C. Fields, Preston Sturges, and Spencer Tracy, but this might well be his masterpiece." -- David Weddle, author of "If They Move, Kill 'Em! The Life and Times of Sam Peckinpah", writer/executive producer "For All Mankind", and writer/supervising producer "Battlestar Galactica"

"Buster Keaton (1895-1966), a director and star of silent comedy classics, emerges as a great auteur and a martyr to Hollywood in this vibrant biography... The story is evocative, entertaining, and laced with lyrical detail. This is an engrossing portrait of a Hollywood legend." -- Publishers Weekly (starred review)

"Curtis draws on abundant archival sources as well as interviews, memoirs, and previous biographies to create a comprehensive, warmly sympathetic life of iconic entertainer Joseph Frank "Buster" Keaton... In lively detail, Curtis... recounts the highs and lows of Keaton's prolific career, tracing 'the development of gags, the logic of gags, the mechanics of gags' as he acted on stage and in silent movies, talkies and TV... Meticulous research informs a brisk biography of an entertainment icon."  -- Kirkus Reviews (starred review)

"A definitive biography that delves into the mystery behind the man who made America laugh in the early days of film." -- Literary Hub

"Authoritative... [Keaton] emerges from the pages of Curtis's [book] not just as the first indie auteur but as the direct forerunner of Indiana Jones and Jason Bourne: the first action hero." -- Tom Shone, Avenue

"Those who are [interested in the entirety of Keaton's story] will feast on Curtis' overstuffed book, which belongs in any film fan's library for providing a close look at the silent era and all of Keaton's efforts, whether big or small, triumph or failure." -- Douglass K. Daniel, Associated Press

"James Curtis's [book] is an immense year-by-year, sometimes week-by-week, account of Keaton as an artist and a man. Every detail of his life and work is here... Curtis takes us through the progress of the brutal comedy act that Joe Keaton raised his son to star in... We even hear about gags that Buster Keaton helped invent for Abbott and Costello in his later, seeming fallow, years." -- Adam Gopnik, The New Yorker

"Curtis is clearly an admirer of Keaton, but he doesn't view his subject through rose-colored glasses: he discusses and puts into context Keaton's battles with alcoholism and mental illness, his rocky marriage, and the devastating impact of poor reviews on some of Keaton's most personal projects. A valuable addition to the literature of film history." -- Booklist